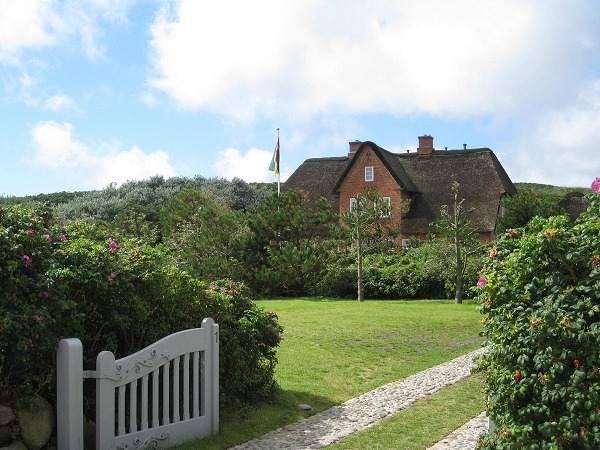 Germany recorded a total of 12 million tourists in 2020, ranking 20th in the world in terms of tourist visits. While many people want to travel to Berlin, Munich and Frankfort, there is more to Germany than its major cities. Why not plan a trip to visit one of Germany’s North Sea islands?

It is easy to stay connected with family and loved ones with a German prepaid SIM card.

The island of Sylt encompasses an area of 99 km2 in the North Sea in northern Germany.

If you are looking for a break from the Baltic sea, then Sylt is for you. Like Rügen and Usedom, Sylt is home to a number of seaside resorts that cater for every travellers need. There are also a number of specialty museums on the island that will interest history enthusiasts. The Hindenburgdamm causeway connects the island to the mainland.

Area: 99 km2
Location: The North Sea
Population: 15 169
How to get there: The best way to get to Sylt from Hamburg is by train which is a 2h31min trip.
Tourist attractions: the Altfriesisches Haus, the Sylt Aquarium, the Sylter Verkehrsgesellschaft, the Friedhof der Heimatlosen, and the Sylter Heimatmuseum.
Places to stay: the Hotel Strandhörn, the Haus Bomhoff Sylt, and Meer-Lust-Sylt Haus Mateika.
Things to do: Things to do in Sylt include visiting a number of specialty museums and the islands aquarium.
Annual visitors: 650 000 visitors/year.

The fifth largest island in Germany is also located in the North Sea and is a part of the North Frisian Islands.

Föhr has a completely different landscape than Sylt having both beaches and marshes on the southern portion of the island. Being one of the smaller German islands, Föhr is popular amoung Germans that want to avoid the busier islands. Thus, Föhr has developed a significant tourism economy.

Föhr is well-connected to mainland Germany by ferry, road, and air transport services.

Area: 82 km2
Location: The North Sea
Population: 8 248
How to get there: The best way to get to Föhr from Hamburg is by car and car ferry which is a 2h55min trip.
Tourist attractions: the Museum Kunst der Westkueste, the Dr. Carl Häberlin Friesenmuseum, the Goting Kliff, the Robbenzentrum Föhr, and the Leuchtturm Olhörn.
Places to stay: the Rackmers-Hof Hotel garni, the Haus Seeadler, and Deichhof Knudsen.
Things to do: Things to do in Föhr include visiting a number of specialty museums and the geological formations on the island.
Annual visitors: over 500 000 visitors/year.

If you are looking for an escape where you can connect with nature, then Pellworm is for you. Unlike some of the other German islands, Pellworm doesn’t have a lot of specialty museums.

Pellworm plays an important major role in the German electrical grid. A hybrid renewable energy plant that uses both wind and photovoltaic energy is found on the island. The plant is one of it the largest in Europe. There are a number of bed and breakfast facilities on the island that will make guests feel welcome.

Area: 37 km2
Location: The North Sea
Population: 1 200
How to get there: The best way to get to Pellworm from Hamburg is by train which is a 3h06min trip.
Tourist attractions: the Neue Pellwormer Dampfschiffahrts, the Leuchtturm, the Sudfall, the Pelle Welle, and the Vogelkoje Pellworm.
Places to stay: the Apartment Radmokerhuus, the Hollandwarft, and Inselquartier-Pellworm.
Things to do: Things to do in Pellworm include spending time exploring the islands many nature trails.
Annual visitors: over 500 000 visitors/year.

Germany’s North Sea islands offer a perfect get away for travellers seeking a quiet holiday.

With an area of 31 km2, Borkum is the eighth largest island in Germany.

Strong winds and a well-developed harbor (for the size of the island) makes Borkum a popular choice among sailing enthusiasts. The island once played an important role in Scandenavian trade routes and one can just picture Viking ships sailing past the island. The remote nature of some parts of the island makes it a perfect training ground for novice sailors. The Wadden Sea borders the island to the south and the North Sea to the north.

Area: 31 km2
Location: The North Sea
Population: 5 002
How to get there: The best way to get to Borkum from Bremen is by train and ferry via Emden which is a 5h37min trip.
Tourist attractions: include the Neuer Leuchtturm, the Heimatmuseum Dykhus, the Borkums Naturschutzgebiet Greune Stee, the Seehundbank auf Borkum, and Nordseeaquarium Borkum.
Places to stay: the Nordsee Hotel Borkum, the Hotel Weisse Düne, and the Hotel Bloemfontein.
Things to do: Things to do in Borkum include visiting the islands lighthouse, specialist museums and the Borkum North Sea Aquarium.
Annual visitors: over 500 000 visitors/year.

Like Pellworm, Norderney is an island that caters for nature lovers.

Don’t expect to race around the island in a hired car. The island occupies an area of 26 km2 and has a 14 km long beach at its northern end. Additionally, Norderney’s eastern part belongs to a national park and thus traffic is strictly regulated in the area to avoid any harm to the park’s wildlife. Pollution on the island is very low which makes it popular among travellers who have health issues.

Ferry and air connections connect the island to mainland Germany.

Area: 26 km2
Location: The North Sea
Population: 5 850
How to get there: The best way to get to Norderney from Bremen is by car and ferry which is a 2h39min trip.
Tourist attractions: the Strandpromenade Norderney, the Leuchtturm Norderney, the Badehaus Norderney, the Bibliothek im Conversationshaus zu Norderney, and the Watt Welten.
Places to stay: the Strandloft Drei Norderney, the Ferienhaus Leuchtfeuer, and the Logierhaus Austernfischer.
Things to do: Things to do in Norderney include visiting the beach promenade, the lighthouse and the bathhouse.
Annual visitors: over 750 000 visitors/year.

The island has an extended beach on its western side. Nature enthusiasts and avid campers enjoy travelling to Amrum. The eastern coast of the islands is home to mudflats and tidal creeks. In addition, several species of birds and marine animals can be found on and in the waters of the island.

Area: 20.46 km2
Location: The North Sea
Population: 2 300
How to get there: The best way to get to Amrum from Hamburg is by train and ferry which is a 7h5min trip.
Tourist attractions: the Amrumer Strand, the Amrumer Leuchtturm, the Kapelle Wittdun, the Naturzentrum Norddorf, and the Leit-und Quermarkenfeuer Norddorf.
Places to stay: the Ferienwohnung Zur Alten Post Amrum, the Hotel Anka, and the Strandloge.
Things to do: Things to do in Amrum include visiting the beach promenade, the lighthouse and Wittdun Chapel.
Annual visitors: over 500 000 visitors/year.

Want to spend time getting in touch with nature? A trip to one of Germany’s North Sea islands is just what you need.

The main island features small beaches in the north and the south and drops to the sea 50 metres (160 ft) high in the north, west and southwest. Heligoland’s most famous landmark is the Lange Anna found northwest of the island proper. The two islands that make up the archipelago were connected until 1720 when the natural connection was destroyed by a storm flood.

Area: 1.7 km2
Location: The North Sea
Population: 1 307
How to get there: The best way to get to Heligoland is to travel from Hamburg. The best mode of transport is train and ferry which is a 4h38min trip.
Tourist attractions: the Lange Anna, the Halunder Jet, the Helgolander Kegelrobben, the Festung Helgoland, and the Museum Helgoland.
Places to stay: the Aqua Marina, the Hotel auf den Hummerklippen, and the Appartements am Aquarium.
Things to do: Things to do in Helgoland include going on various hikes.
Annual visitors: over 20 000 visitors/year.

One of the smaller of the German islands, Langeoog is moderately developed and the islands lack of air pollution makes it popular among residents and tourists who suffer from respiratory problems.

While there are some tourist attractions on the island, Langeoog’s road infrastructure is very under developed. This means that there are very few cars on the island. Tourism is Lengeoog’s main source of income with guest rooms present in almost all island buildings. There are also several hotels. The youth hostel is several kilometres outside the town.

Area: 19.67 km2
Location: The North Sea
Population: 1 812
How to get there: The best way to get to Langeoog is to travel from Bremen. The best mode of transport is bus and ferry which is a 4h2min trip.
Tourist attractions: Langeoog’s water tower, the tower of the Catholic Church, the tower of the Protestant church, the Melkhörndüne, and the Seenotbeobachtungsstelle.
Places to stay: the Nordseehotel Kröger, the Appartementhaus Alte Post, and the Hotel Bethanien.
Things to do: Things to do in Langeoog include visiting the islands various landmarks.
Annual visitors: over 60 000 visitors/year.

Wangerooge is one of the 32 Frisian Islands in the North Sea located close to the coasts of the Netherlands, Germany and Denmark.

The island is attractive to tourists due to the beaches, various recreation facilities and its relaxed atmosphere. A yearly beach volleyball tournament, usually held at the beginning of August, is one of the main attractions in the summer. In addition, other water sports such as windsurfing, kite-surfing and board-riding are popular activities.

Area: 7.94 km2
Location: The North Sea
Population: 1 214
How to get there: The best way to get to Wangerooge is to travel from Bremen. The best mode of transport is bus which is a 4h22min trip.
Tourist attractions: the Alter Leuchtturm, the Wooge Action Surfcafe, the Beheiztes Meerwasser-Freibad, the Wattwanderzentrum Ostfriesland, and the Nationalpark-Haus Wittbulten.
Places to stay: Living-art at Wangerooge, the Ferienwohnung Krabbe, and the Osterdüne 62.
Things to do: tourists can enjoy various watersports activities.
Annual visitors: over 100 000 visitors/year.

Baltrum is the smallest of the Friesian islands chain.

Although Baltrum became a seaside resort in 1876, the tourism grew very slowly. Since 1966 Baltrum has been a seaside health resort approved by the state of Germany. Two hotels were opened in the end of the 19th century, Hotel Küper in 1892 and Hotel zur Post in 1895.

Before the World War II broke out 5,000 to 6,000 people visited Baltrum annually. In 1960 nearly 17,000 tourists showed up and since the 1970s there are over 30,000 people making holidays every year during the peak season. Besides the approximately 500 inhabitants about 3,000 guests are constantly living on the island during the peak seasons exhausting the acceptance capacity of the two small villages.

Area: 6.50 km2
Location: The North Sea
Population: 599
How to get there: The best way to get to Baltrum is to travel from Bremen. The best mode of transport is train and ferry which is a 5h16min trip.
Tourist attractions: the Old church of the island, the Great Lutheran church of the island, the Saint Nicholas church, the Historical palisade for protection:, and the Museum of local history in the old custom house.
Places to stay: Seevilla Wietjes Whg 5, Ferienhaus Nordstrand Whg 5, and Akzent Hotel Seehof.
Things to do: visiting the various historical churches on the island.
Annual visitors: over 100 000 visitors/year.

As you can see Germany’s North Sea islands will prove to be both a relaxing vacation as well as an educational one. There are plenty of seaside resorts on offer and the many specialist museums on the island will provide you with an inside into Germany’s history that you many have never known before.