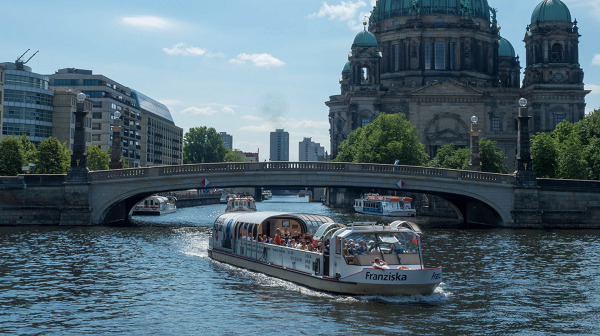 Like many countries in Europe, major rivers flow through Germany. These form the lifeblood of the country and have historically been the site of the development of major cities. In this article we discover more about the river islands of Germany.

Make sure that you are using a German prepaid SIM card when in Germany.

The German capital of Berlin attracts many visitors who want to find out more about the city’s famous history. From classical architecture to museums, Berlin has it all.

What you might not know is that some of these great museums are on an island. Museum Island (Museumsinsel) is located in the heart of Berlin’s city center on the Spree River. In addition to having five world-class museums, the island is also a UNESCO heritage site, one of the three that can be found in the Capital.

Area: 0,086 km2
Location: Berlin
Population: 0 (tourist attraction)
How to get there: Museum Island is located within Berlin.
Tourist attractions: the Altes Museum, the Neues Museum, the Alte Nationalgalerie, the Bode Museum, and the Pergamon Museum.
Places to stay (near Museum Island): the Schulz Hotel Berlin Wall at the East Side Gallery, the Hotel Neuer Fritz, and Maritim proArte Hotel Berlin.
Things to do: visit the various museums on the island.
Annual visitors: over 2.3 million visitors/year

If you feel like you need a bit of solitude, then Graswerth is for you.

Graswerth is a small, narrow island on the Rhine River near Koblenz and is a natural reserve which hosts many rare species of birds. The island is crossed by the A48 Autobahn via the Bendorfer Bridge. The city of Koblenz is the perfect base to explore the island and has plenty of accommodation options to suit any budget.

Area: 2 km2
Location: River Rhine
Population: 0 (natural reserve)
How to get there: The closest city to Graswerth is Koblenz.
Tourist attractions (near Graswerth): the Palace of the archbishop-electors of Trier, the Stolzenfels Castle, and the Koblenz cable car.
Places to stay (near Graswerth): Super 8 by Wyndham Koblenz, Hotel Morjan, and Hotel Brenner.
Things to do: birdwatching on the island and spending some time with nature.
Annual visitors: over 5 000 visitors/year

When on vacation, many travellers want to stay in hotels where they feel that they are free of the trappings of houework. If you are a fan of camping, then Lühesand is for you.

Lühesand is a small island of 1.24 km2 in the river Elbe. Featuring rugged terrain, Lühesand is popular among campers and is accessible by ferry from Grünendeich’s westerly exclave Sandhörn. Be sure to pack warm clothing as the weather can change quickly and frequently.

Area: 1.24 km2
Location: River Elbe
Population: occasional campers.
How to get there: The closest city to Lühesand is Stade.
Tourist attractions (near Lühesand): the St Cosmae et Damiani Lutheran Church, the Wilhadi Lutheran Church, and the Schwedenspeicher.
Places to stay (near Lühesand): H+ Hotel Stade Herzog Widukind, Hotel Stadthafen Stade, and Hotel Am Fischmarkt.
Things to do: Camping on Lühesand and visiting various tourist attractions in Stade.
Annual visitors: over 8 000 visitors/year.

Germany played an important role in the growth of Christianity in Central Europe. Many religious sites can be found throughout the country.

One such site is Nonnenwerth, an island in the Rhine River between Rolandseck and Bad Honnef. The island has been the site of a monastery since the 12th century. The monastery was originally founded by Benedictine monks and was then taken over by Franciscan monks. Since then, the monastery has been home to a Franciscan educational institution.

Like Lühesand, Rettbergsaue is a popular site for campers who are exploring the German countryside.

Rettbergsaue is a natural island in the Rhine River at Wiesbaden. The island is mostly covered with trees and has a rich bird and plant life. Approximately 90% of the island is protected, with the remainder used for recreational and agricultural purposes.

While most of Germany’s river islands don’t hold many tourist attractions themselves, they are a great way to explore German cities that you may never have thought of before.