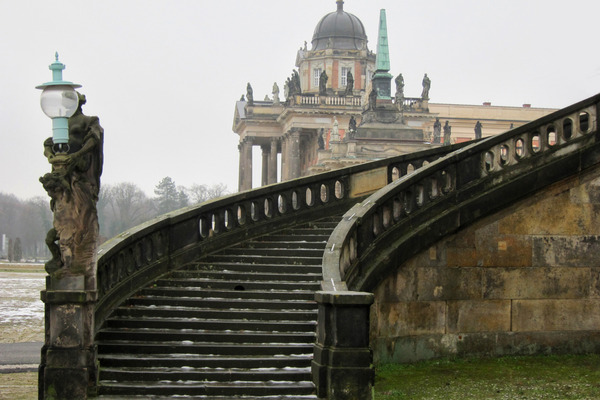 Surrounding the city state of Berlin, the state of Brandenburg is popular amoung tourists who want to use the German capital as a base to explore the northern part of the country. In this article, we will highlight the top tourist attractions in Brandenburg.

The best way to experience Germany is with a German tourist SIM card. Make sure you purchase yours today.

There is plenty to do in Potsdam outside of the Sanssouci Palace.

Some of the more notable sights in the city include the smaller rendition of Berlin’s Brandenburg Gate and St Nicholas Church which was reconstructed after it was heavily damaged in World War II. Tourists should also visit the Lindenstraße memorial site.

Why not plan a trip to one of Germany’s Baltic Sea Islands?

The Sanssouci Palace and Gardens

The Sanssouci Palace was built as a summer residence for Prussian King Frederick the Great.

The entire complex is made up of the Sanssouci Palace, the Neues Palais, and 600 acres (243 hectares) of sprawling parklands which includes chateâux, monuments, temples and statues.

Why not plan a trip to one of Germany’s North Sea Islands?

If you are looking for a bit of solitude, an adventure into the Spreewald Forest is just what you need.

The Spree River dominates the state of Brandenburg and carves a path through the Spreewald forest. Exploring the forest is an adventure and most tourists explore the forest on board a wooden barge or paddle boat. Travellers have the option of booking into one of the thatched roof cottages or guesthouses that are found in the forest depths.

Dont forget to plan a trip to one of Germany’s river islands.

Tucked within Germany’s lush greenery is The Tropical Islands Resort. The resort was designed as a tropical oasis and is just one hour south of Berlin.

Found just one hour outside of Berlin, the Tropical Islands Resort is popular among tourists and locals. The indoor pool is built inside a former-aircraft hangar is equipped with a spa, and lush green trees and bushes. The complex has several pools and water slides; it even has bars and restaurants, hammocks and overnight accommodation for those who party to hard.

For nature lovers, a trip to a waterfall is always a magical experience. Why not visit the worlds biggest and best?

As with most parts of Germany, most travelers flock to Brandenburg to learn about Germany’s history. The KZ Sachsenhausen concentration camp was an important asset in Nazi era Germany. Its location close to Berlin means that Sachsenhausen was one of the first camps to open. Later it was used as a training facility for the SS. A tour of the camp is humbling but popular among tourists.

Did you know that Berlin is considered one of the most beautiful cities in the world? Why not find out which cities made the top 10 list?

Babelsberg Studios is a popular attraction and is used to shoot many German television shows.

In addition, many Hollywood directors use the studios as a site for their films. One of the most famous films shot at Babelsberg Studios was Quinten Tarantino’s Inglorious Bastards.  The studio was significantly impacted by Covid but is slowly opening its doors to tourists once again

The Babelsberg Park lies on the banks of the Havel River and is very popular among nature lovers.

A wonder around the grounds will see you marvel at the well keps lawn as well as the sculptures and mosaics found around the park. There are also Gothic fountains, a landscaped English garden and views of the Jungfernsee and Tiefer See lakes. The Babelsberg Palace is one of the major tourist attractions in Brandenburg.

If the Babelsberg Park didn’t satisfy your itch to get closer to nature, the Lower Oder Valley National Park may be the answer.

The arrival of more than 13 000 cranes attracts wildlife enthusiasts and photographers on a yearly basis. Other wildlife sightings include otters, beavers and eagles. These are common sights if you follow the hiking trails and cycling routes that traverse the park.

Haunted houses and abandonded buildings have peeked the interest of tousits for centuries.

Traditionally, the abandoned complex of the Beelitz-Heilstätten hospital attracted niche photographers and travellers who are fond of a bit of horror.  However, the hospital fell victim to significant vandalism which forced the local government to prevent regular visits. Tourists can now explore the site by following a canopy walk around the grounds.

Covering 750 km2, the Barnim Nature Park is popular amoung nature lovers. The diverse landscape of forests, lakes, pastures and moorlands easily accessible and can be explored as a day trip from both Berlin and Potsdam.

As you can see, the top tourist attractions in Brandenburg offer travellers a wholesome insight into some of Germany’s natural beuty as well as its historical past.