Top 10 Best states to visit for Christmas in the USA 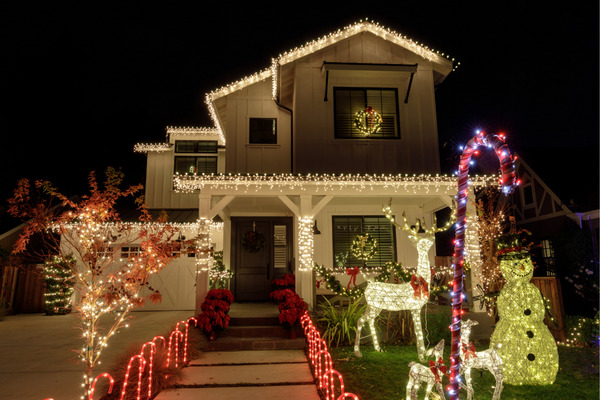 When Christmas is mentioned, many people automatically think of Europe. The snow in the Alps and cuddling with loved ones next to a warm fireplace while watching the snow fall softly on window panes is magical. And then there are the Christmas markets in Germany which are major tourist attractions. However, Christmas is just as big in the USA which has its own traditions and Christmas sights. In this article, we will profile the best states to visit during Christmas.

This is definitely a trip where you will be snapping a lot of pics and sharing them on social media. Stay connected with a USA tourist SIM card.

New York is the first state that one thinks of when thinking about Christmas in the USA. Cold weather and a generous covering of snow makes New York magical. Couple that with ice skating outside the Rockerfeller Centre where you will find the worlds biggest Christmas tree and you will embrace your inner child as you wish for that Christmas miracle.

Tourist attractions: the Brooklyn Bridge, the Empire State Building, and the Statue of Liberty.

Things to do: Central Park, The Metropolitan Museum of Art, and The National 9/11 Memorial & Museum.

Adjacent to the State of New York is Vermont. It has all of the charm of New York minus the traffic, sea of high-rise buildings and dense population. Travellers who want to experience a white Christmas with a log cabin and a warm fire place flock to Vermont, as do most New Yorkers who don’t want to queue for three hours in the freezing cold for their opportunity to skate outside the Rockerfeller Center.

Things to do: the Burlington Bike Path, Lake Champlain, and the Stowe Recreation Path.

Nestled at the foot of the Southern Rockey Mountains is the state of Colorado. With an average winter temperature of 8°C during the day and -8°C during the evenings, you are almost guaranteed to have a white Christmas in Colorado. But the weather outside will be far from frightful, Colorado has a number of ski-resorts which will only add to your Christmas experience.

Situated on the eastern seaboard of the USA, Massachusetts has played an important role in the development of the US’s Christmas culture. Settled predominantly by European settlers from England and Ireland, these immigrants paid significant attention to Christmas as it reminded them of home. The culture and tradition of these settlers grew throughout the years and made Massachusetts one of the key states to visit when experiencing Christmas in the USA.

The USA’s northern most state, Alaska has all of the makings of a Christmas that most people think of when they wish for a white Christmas. With an average temperature of 13°C during the day and -10°C at night, you will definitely wake up to a blanket of snow on your Alaskan journey. You may even get a chance to take your kids to visit Santa.

Places to stay: the Frontier Suites Hotel in Juneau, the Four Points by Sheraton Juneau, and the Juneau Hotel.

In terms of historical significance, Pennsylvania is arguably the most important in the USA. Being in close proximity to both New York and Massachusetts, many of the settlers that made their way west across the country eventually settled in Pennsylvania. You may not be guaranteed a white Christmas; however, the customs and traditions that families practice today have been handed down through the generations making Christmas a memorable time.

Things to do: Mount Washington, The Hershey Story Museum, and Lancaster Central Market.

As you move westward into Central USA, you will notice a change of scenery as the number of big cities make way for farmlands and pastures. Missouri is the beginning of this journey. As rural areas become more prevalent, there is a strong bond within the community. This is where you will find the Christmas spirit that is often depicted in the multiple Hallmark Movies that receive a lot of airtime over Christmas.

Tourist attractions: the Missouri Botanical Garden, the National WWI Museum and Memorial, and The Gateway Arch.

Things to do: the St. Louis Zoo, the Johnny Morris’ Wonders of Wildlife National Museum and Aquarium, and the Titanic Museum.

Like Missouri, Illinois is the beginning of your journey into the farming heartland of the USA. If you find yourself in Illinois during winter, you will be greeted by cold weather and a warm welcome. Small towns take their welcomes seriously and it is these towns that typically go all out over Christmas as the holiday is their main source of income. It also helps that Christmas is a Christian holiday, so the Irish population in Chicago will make the holiday special.

Most spoken languages: English, and Spanish.

The state of Washington often gets confused with Washington DC (which is the capital of the USA). Located on the Western Seaboard, like Colorado and Alaska, Washington is your best chance to experience the traditional imagery of a white Christmas. The state’s temperamental weather and plummeting temperatures will force you seek comfort by a warm fireplace. This does not stop the community spirit and coming together for the holiday.

Things to do: the Woodland Park Zoo, the Pike Place Market, and The Museum of Flight.

Ending off our list of the best states to visit over Christmas is South Carolina. A state that is famous for having a significant population of English settlers can came from England. While the weather is more moderate in South Carolina, you will most certainly get into the Christmas spirit as many families continue the traditions handed down by their ancestors.

Places to stay: the Rodeway Inn, Comfort Suites At the University, and Days Inn by Wyndham Little River.

Christmas in the USA can be a memorable experience. While you may not experience a white Christmas in every state, the customs and traditions that are experienced over the holiday makes choosing the best states to visit during Christmas that much easier.