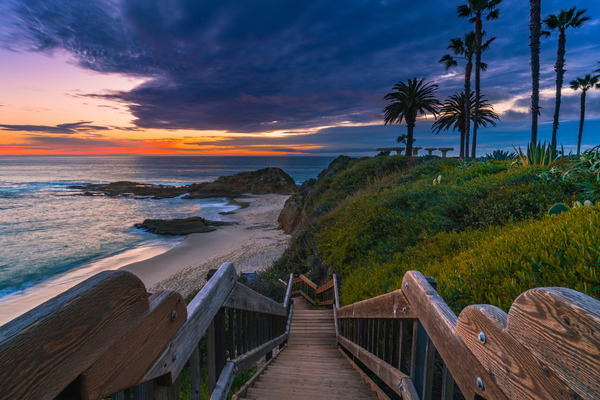 When the Beach Boys released Surfin’ USA in 1963, the band introduced the world to a side of the USA which quickly became popular around the world. A trip to the beach is about slowing down, catching some sun rays, relaxing and of course surfing (for those who are adventurous). The USA has just over 153 645 km of coastline and is home to some of the best beaches in the world. In this article, we take a closer look at the five best USA beaches to visit in January.

When travelling to the USA, make sure that you are using a USA SIM card to effortlessly stay in touch with your loved ones. You will definitely want to share pictures of some of these beaches.

Getting to Waikiki Beach may take a lot of travelling. However, once there, the hours spent on the plane are guaranteed to be a distant memory.

Waikiki Beach is one of the most popular suburbs of Honolulu on the island of O’ahu (which means The Gathering Place) in Hawaii. Because of the development of the shoreline, the area of Waikiki Beach has eight distinct beaches. The warm Pacific Ocean and gnarly waves make this the most popular spot for honeymooners or first time visitors to the island.

Situated on the west coast, California is one of the most visited states in the USA.

Laguna beach epitomizes surfing culture and is the beach that many believed inspired the Beach Boys to write Surfin USA.  Laguna beach is famous for its year-round mild climate, access to the warm Pacific Ocean and scenic coves. Laguna Beach is home to one of the oldest surfing competitions (where participation is only open to residents of Laguna Beach), the second oldest beach volleyball tournament in the USA and the longest running skim boarding contest on the pro circuit. As you can see, there is a lot to do at Laguna Beach.

Places to stay near Laguna Beach: the Laguna Riviera, The Tides Laguna Beach, and the Capri Laguna on the Beach.

If you are travelling to the East coast of the USA, you will find Sait Pete Beach.

Without reviving the whole west coast vs east coast rivalry, many travellers believe that Saint Pete Beach is one of the best beaches in the USA. Corey Avenue is the heart of Saint Pete Beach and features plenty of bars, restaurants and shopping options. The main attraction though is the beach which features golden sands and access to the warm waters of the Gulf of Mexico.

Another popular destination on the Gulf of Mexico is Grand Isle Louisiana.

Grand Isle suffered extensive damage during Hurricane Katrina and a lot of effort has been put in to rebuild this popular tourist destination. One of the only places in Louisiana where you can surf, Grand Isle is a popular fishing destination. The annual Cajun Rodeo attracts over 15 000 people and is Grand Isle’s major source of tourism income.

Places to stay near Grand Isle: the Blue Dolphin Inn and Cottages, and C’est Bon.

San Juan is an island nation in the Caribbean Sea whose Sovreign State is the USA.

A popular tourist destination among US residents, many people travel to Puerto Rico to start their Caribbean journey. There are plenty of beaches on the island, the most popular being El Escambrón Beach because it is protected by coral reefs that serve as breaks waters from the Atlantic Ocean waves. Like Grand Isle and Saint Pete, San Juan is in the hurricane belt, so plan your trip with care.

While winter is probably not the time you would consider visiting a beach, the best USA beaches to visit in January can offer a welcome break from icy conditions.