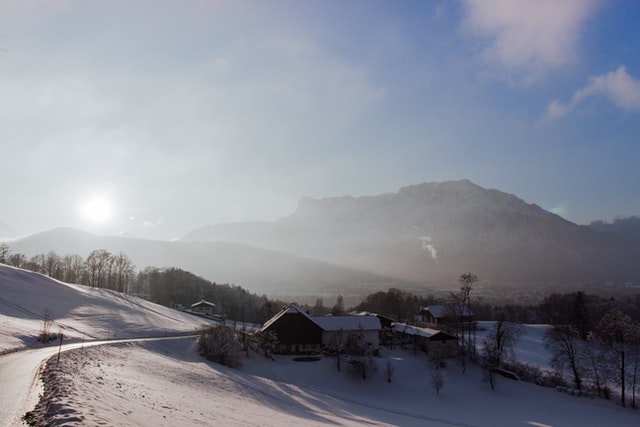 When most of us think about winter, we have visions of cuddling up under a blanket and watching our favourite television series or reading a book that has been staring at us from the bookshelf. The last thing that immediately comes to mind is booking a much needed holiday.

Winter is a great season to travel. It isn’t peak season at many of the destinations that you want to travel to, and the allure of a complete change of scenery (with snow being foreign to many people in the world) is very enticing. So, in between your series marathon, consider going on a vacation.

Natural events that happen during winter

Depending on where you visit, you may face a number of different natural events.

The best travel tip for travelling during winter is to know as much about the weather at your destination as possible. Some countries experience light snowfall while other countries face blizzard conditions. This will guide you as to what kind of clothing you should pack as well as the types of activities you should plan.

Be aware of the holidays and festivals that take place during winter. This will allow you to maximise your travelling experience.

Christmas is a major holiday and is widely celebrated in the Northern Hemisphere.

However, travellers should do some research into the traditions of the country that they are visiting as Christmas is not as commercialised in other parts of the world as it is in the USA.

Winter festivals around the world

Despite the cold weather, winter is a great time to travel around the world. There are a number of amazing festivals to participate in during winter.

Some of the best festivals include:

Top 10 Places to Visit in Winter

Vienna, Austria’s capital, lies in the country’s east on the Danube River. Its artistic and intellectual legacy was shaped by residents including Mozart, Beethoven and Sigmund Freud. The city is also known for its Imperial palaces, including Schönbrunn, the Habsburgs’ summer residence.

Vienna is regarded as one of the cultural and historical gems of Europe. There are plenty of sights and sounds that one can experience.

Some of the best things to do in Vienna includes: a city Bus Tour and Schönbrunn Palace; a tour of Schönbrunn Palace with its gardens; a guided tour of the Vienna Spanish Riding School; and a Johann Strauss and Mozart Concert.

Tromsø is a major cultural hub above the Arctic Circle. It’s famed as a viewing point for colorful Northern Lights that sometime light up the nighttime sky. The city’s historic center, on the island of Tromsø, is distinguished by its centuries-old wooden houses. The 1965 Arctic Cathedral, with its distinctive peaked roof and soaring stained-glass windows, dominates the skyline.

Make sure that you do not miss out on the Top 10 places to visit in Summer,

Reykjavik is Iceland’s capital and largest city. It’s home to the National and Saga museums, tracing Iceland’s Viking history. The striking concrete Hallgrimskirkja church and rotating Perlan glass dome offer sweeping views of the sea and nearby hills. Exemplifying the island’s volcanic activity is the geothermal Blue Lagoon spa, near the village of Grindavik.

Places to stay in Reykjavik include: the Eyja Guldsmeden Hotel, the Rey Apartments, the Reykjavik Residence Apartment Hotel, and Sogavegur 103.

Things to do in Reykjavik include: a Golden Circle, Blue Lagoon tour including admission to the Kerid volcanic crater, a South Coast full day tour by minibus, and a Reykjavik Food Walk.

Berlin dates to the 13th century. Reminders of the city’s turbulent 20th-century history include its Holocaust memorial and the Berlin Wall’s graffitied remains. Divided during the Cold War, its 18th-century Brandenburg Gate has become a symbol of reunification. The city’s also known for its art scene and modern landmarks like the gold-colored, swoop-roofed Berliner Philharmonie, built in 1963.

Places to stay in Berlin include: the Bensimon apartments Mitte – Moabit, the Downtown Apartments Mitte, the BerLietz and Hotel Pension Blumenbach.

Things to do in Berlin include: a 1-Hour City Tour by Boat with Guaranteed Seating, a Reichstag: Tour with Plenary Chamber and Dome in German, a visit to Pergamon Museum, and a trip to Madame Tussauds.

Québec City sits on the Saint Lawrence River in Canada’s mostly French-speaking Québec province. Dating to 1608, it has a fortified colonial core, Vieux-Québec and Place Royale, with stone buildings and narrow streets. This area is the site of the towering Château Frontenac Hotel and imposing Citadelle of Québec. The Petit Champlain district’s cobblestone streets are lined with bistros and boutiques.

Places to stay in Québec City include: the Le Gite Du Hu-Art, the L’Arvidienne Couette et Café, and the Hôtel Le Germain Québec

Things to do in Québec City include: a Half-Day Trip to Montmorency Falls and Ste-Anne-de-Beaupré from Quebec city, a Quebec City Walking Tour, and an evening gourmet tour five course dinner.

New York City comprises 5 boroughs sitting where the Hudson River meets the Atlantic Ocean. At its core is Manhattan, a densely populated borough that’s among the world’s major commercial, financial and cultural centers. Its iconic sites include skyscrapers such as the Empire State Building and sprawling Central Park. Broadway theater is staged in neon-lit Times Square.

Places to stay in New York include: the Four Seasons Hotel New York Downtown, the The Bowery Hotel, and the Crosby Street Hotel.

Things to do in New York include: a New York in One Day Guided Sightseeing Tour, a Statue of Liberty & Ellis Island Tour, and a visit to the 9/11 Memorial Museum.

Knysna is a natural paradise of lush, indigenous forests, tranquil lakes and golden beaches. She nestles on the banks of a breathtakingly pretty lagoon, now a protected marine reserve that is home to the extraordinary sea horse and over 200 species of fish. Beaches, lakes, mountains and rivers provide endless opportunity for leisure and outdoor adventure. Within the town, craft shops, flea-markets and cosy cafés beckon with small-town charm and hospitality. The area around Knysna is a veritable Garden of Eden. This is home of the only forest elephant in South Africa, the rare Pansy Shell, the brilliantly coloured, and elusive, Knysna Loerie, a plethora of waterfowl and forest birds, dolphins and visiting whales.

Places to stay in Knysna include: the Waterfront – Knysna Quays Accommodation, the Bollard Bay House, and the Strode House.

Things to do in Knysna include: a Knysna Sunset Sailing Cruise, a 90 Minute Eco Adventure, and Knysna Lagoon Boat Cruises.

New Orleans is a Louisiana city on the Mississippi River, near the Gulf of Mexico. Nicknamed the “Big Easy,” it’s known for its round-the-clock nightlife, vibrant live-music scene and spicy, singular cuisine reflecting its history as a melting pot of French, African and American cultures.

Places to stay in New Orleans include: the Windsor Court Hotel, the JW Marriott New Orleans, and the Hotel Monteleone.

Things to do in New Orleans include: a Haunted Ghost, Voodoo, & Vampire Tour, a Food Walking Tour of the French Quarter, and an Airboat Ride.

Whitehorse is the capital of northwest Canada’s Yukon territory. To the south are the basalt cliffs of Miles Canyon, site of a former gold rush town. From the canyon, the Yukon River Loop Trail winds north past the Whitehorse Fishway fish ladder toward the S.S. Klondike, a restored sternwheeler that once plied the Yukon River. North, the Takhini Hot Pools’ mineral springs offer views of the northern lights in winter.

Places to stay in Whitehorse includes: the Wild North B&B, the Town and Mountain Hotel, and the Best Western Gold Rush Inn.

Things to do in Whitehorse include: a Yukon Dog Sledding and Sightseeing Tour, a White Pass Summit and Yukon Suspension Bridge Tour, and an evening Aurora Viewing Tour.

Rio de Janeiro is a huge seaside city in Brazil, famed for its Copacabana and Ipanema beaches, 38m Christ the Redeemer statue atop Mount Corcovado and for Sugarloaf Mountain, a granite peak with cable cars to its summit. The city is also known for its sprawling favelas (shanty towns). Its raucous Carnaval festival, featuring parade floats, flamboyant costumes and samba dancers, is considered the world’s largest.

Places to stay in Rio include: the Hotel Atlantico Prime, the Rio Othon Palace, and the Linx Galeão.

Things to do in Rio include: a full day tour of Rio which includes the Statue of Christ the Redeemer, a visit to Sugarloaf Mountain and Selaron, and of course a visit to the Copacabana and Ipanema Beaches.

While winter is the coldest season of the year, it is the perfect time to travel if you want to experience a white Christmas.

Winter is characterised by cold weather as well as icy and snowy conditions. Be sure to know what you are  in for when travelling to these destinations.

Travellers should pack their bags expecting cold weather and do some research into their public transport options as they may be impacted by the weather.

Most countries do speak English. However, it is recommended that you have a basic knowledge of the language used at your destination.